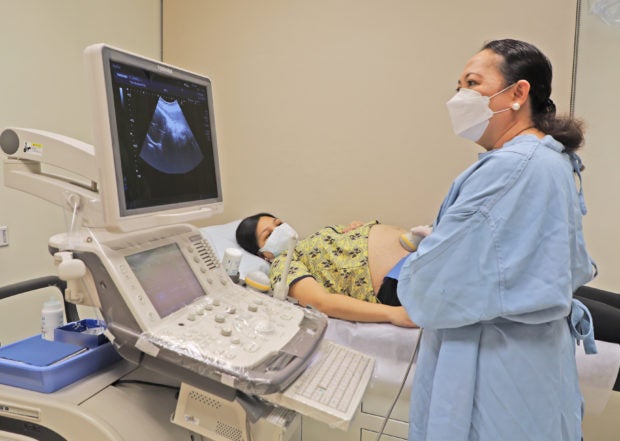 One of the routines of pregnancy care is screening for birth defects. Although most babies are born without birth defects, there is always a possibility that there is a risk of abnormal development, regardless of the age, lifestyle, family or personal history of the mother or father.

Birth defect screening is a tool to detect structurally critical and significant congenital heart defects before birth. When you’re pregnant, you only want the best for your unborn baby. So a high-risk pregnancy or an unexpected diagnosis can be really scary.

Such is the case of a 26-year-old woman with a twin pregnancy who was diagnosed at 22 weeks gestation with supraventricular tachycardia (SVT) and hydrops fetalis in one of the twins.

Regular monitoring of pregnancy helps the healthcare provider to identify potential health issues early and take steps to manage them to protect the health of the mother and unborn child.

Fetal arrhythmia is an abnormal or irregular heartbeat that can occur while the baby is still in the womb. Some types of arrhythmias are relatively mild and won’t affect the baby at all, while others can be life-threatening. Fetal SVT is the most commonly reported type of fetal arrhythmia, which refers to a rapid heartbeat that begins in the upper chambers of the heart. Most cases are mild and transient and do not require treatment. However, persistent fetal tachycardia, if left untreated, can lead to fetal hydrops, a serious and life-threatening condition characterized by excess fluid in different parts of the fetus’ body.

The case report “Transplacental therapy for supraventricular tachycardia and fetal hydrops in a twin pregnancy” emphasizes that while management of multifetal gestation affected by TVS can be difficult due to lack of information, with early diagnosis, successful multidisciplinary treatment, and strict monitoring, good fetal and neonatal outcomes can be achieved.

Written by Dr. Joseph Carl Mariano Macalintal and Dr. Maria Rosario Castillo-Cheng, Perinatologists of Institute for Women’s Health, The Medical City (TMC) Ortigas, and Dr. Dexter Eugene D. Cheng, Pediatric Cardiologist and Interventionist of the same institution, the case report has been presented and published both locally and internationally. This unique and interesting case report won first place and was commended by the recent Philippine Society of Maternal Fetal Medicine Fellows’ Forum and was published in the International Journal prenatal cardiology.

This literary medical publication reports on the case of a patient pregnant with twins who went to another facility for a birth defect scan and was discovered by chance to have 22n/a week of pregnancy a problem with one of her babies. One twin had fetal tachycardia with a recorded heart rate of 242 bpm (normal fetal heart rate is 120-160 beats per minute). Other sonological findings on Twin A included edema of the skin and scalp and pleural effusion (an unusual amount of fluid in the lungs).

The patient was referred to Dr. Castillo-Cheng who recommended that a 2D fetal echocardiogram be performed at The Medical City Ortigas. The 2D fetal echocardiogram, a useful auxiliary tool in the diagnosis and management of fetal arrhythmia, was performed by Dr. Dexter Eugene Cheng. Using this fetal echo, it was determined that twin A suffered from cardiogenic fetal hydrops secondary to supraventricular tachycardia. The second twin, Twin B, was found to be normal with no heart abnormalities. The patient was then admitted to The Medical City Ortigas for further examination and management of Twin A’s condition.

Despite the condition of twin A, immediate delivery was not a plausible option due to the extreme prematurity of both twins. The multidisciplinary team, with the full consent obtained from the patient and her husband, opted for the administration of transplacental antiarrhythmic medical treatment.

“Our plan was to closely monitor the patient and her twins during medical treatment, push the pregnancy as close to term as possible, and deliver at 37 weeks gestation to avoid complications associated with prematurity,” explains Dr. Castillo-Cheng.

Twin A improved significantly with the start of medical treatment. Her dropsical condition resolved without her brother, Twin B and their mother showing any deterioration or serious untoward complications. Good growth was achieved and an unremarkable prenatal course subsequently ensued. The patient was able to go to term and delivered by Caesarean section at 37 weeks due to breech presentation. Babies are born with good Apgar scores. Their heart rates were both normal and with regular rhythms. Although the birth electrocardiogram (ECG) of twin A, who had been previously diagnosed with SVT, showed normal sinus rhythm, his chest X-ray showed cardiomegaly (enlarged heart), which pediatric cardiologist Dr. Dexter Eugene Cheng managed accordingly. Twin A was discharged on the seventh day of life after his medication ended and a 2D echocardiogram showed normal heart structure and function.

Dr. Castillo-Cheng says that apart from the prematurity which made immediate delivery impossible, there were other factors which made this case difficult and interesting. On the one hand, the management of SVT in multifetal pregnancies, the cases of which are even less frequent, is not yet defined, unlike single pregnancies.

“Several case reports and studies have been made and reported abroad regarding both the success and failure of transplacental anti-arrhythmic therapy in singleton pregnancies, but information on the successful management of affected multifetal gestation by fetal tachycardia are rare to non-existent,” adds Dr. Castillo-Cheng.

The particularity of this case is mainly the management of the isolated arrhythmia in one of the twins, made more complicated by the possible adverse effect of antiarrhythmic drugs on the unaffected twin and on the mother as well.

“Dr. Dexter Cheng and I had to consider the potential risks that may arise with antiarrhythmic therapy to the mother and the other normal fetus, the ability to provide adequate monitoring, and the mother’s willingness to undergo a such therapy,” says Dr. Castillo-Cheng.

She further explains that once the decision to treat was made, close fetal and maternal monitoring was needed to detect and manage side effects earlier. A multidisciplinary team conference involving the maternal-fetal medicine team and the pediatric cardiology department headed by Dr. Castillo-Cheng and Dr. Dexter Eugene Cheng, respectively, was held to discuss with the patient and her family the possible adverse drug effects and plans for close fetal monitoring which included bi-weekly fetal growth and cardiac monitoring. Regular monitoring of complete blood count, serum electrolytes and liver enzymes was also performed during pregnancy.

As the case report cited, “Concurrent administration of digoxin and amiodarone can successfully treat atrial fibrillation and induce cardioversion in the affected twin with careful monitoring for adverse side effects allowing for continuation of pregnancy. and thus avoiding the complications of premature delivery”.

“It was a happy and successful outcome for this pregnancy. The hydrops was completely reversed in Twin A and postnatal evaluation of the twins showed no abnormalities,” says Dr. Castillo-Cheng. Despite this, the parents were informed of the possible evolution of Twin A’s condition, the possibility of recurrence later in life and the importance of long-term follow-up.