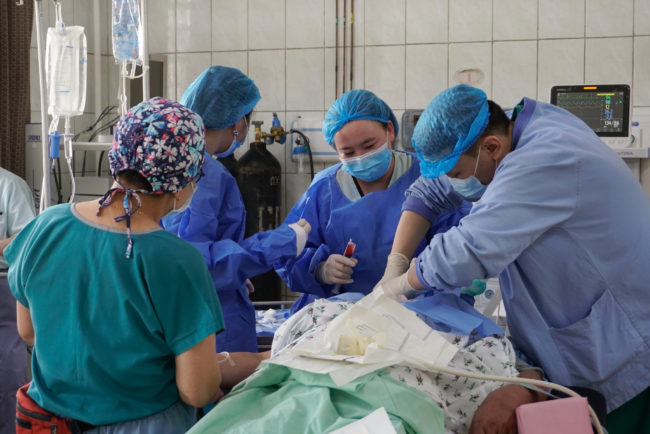 MURUN, KHUVSGUL PROVINCE, MONGOLIA – Mongolia has long struggled with extraordinary rates of liver cancer – nine times the global average, according to the World Health Organization. In 2020 alone, more than 2,000 Mongols succumbed to liver cancer, roughly the same number as the total number of COVID-19 deaths in the country.

This year, Dalkhsuren Dagvadorj also feared that he would die this way. A shepherd in Burentogtokh soum in the northern province of Khuvsgul, Dalkhsuren was diagnosed with liver cancer in March. He traveled 750 kilometers (466 miles) to the National Cancer Center in Ulaanbaatar, the capital, to confirm the diagnosis. He was told that the first available date for surgery was several weeks away. Dalkhsuren’s tumor was growing more than a centimeter every month. The wait could prove fatal.

Fortunately, the 55-year-old shepherd didn’t have to wait. A change last year allowed doctors to perform liver cancer surgery in other parts of the country – particularly Khuvsgul province – providing a crucial lifeline for people like Dalkhsuren.

The most common risk factor worldwide for liver cancer is long-term infection with hepatitis B or hepatitis C. Heavy alcohol consumption, which Mongolia has long struggled with, is also a postman. Transmission of viral hepatitis was a particular scourge in the 1970s and 1980s when, before disposable syringes became available, Mongols boiled, sterilized and reused glass syringes.

But even today, chronic hepatitis B and C infections account for almost 95% of all cases of liver cancer. People can live with an infection for years without showing symptoms, so many don’t realize they are sick. In general, liver cancer screenings are so rare that more than 70% of cancer cases are diagnosed at the end stage. In 2020, the liver cancer death rate in Mongolia was 80.6 per 100,000 people, compared to a global rate of 8.7.

Only a fifth of diagnosed liver cancer cases undergo surgery, according to the World Health Organization, and Dalkhsuren was one of them; it was his only option. The main options for treating liver cancer are either partial liver resection – the surgical removal of the tumor – or a transplant. Transplant surgeries are only available in Ulaanbaatar, but with recent changes to Mongolia’s healthcare system, partial liver resections now take place outside the capital, in Khuvsgul province.

In late April, Dalkhsuren lay in a hospital bed at the state hospital in his home province, an oxygen tube through his nose. Local surgeons had just removed four-fifths of his liver, including all the cancer cells. Given the organ’s ability to regenerate, doctors told him he would recover quickly if he followed their post-operative instructions. “I was able to get rid of this cancer very quickly,” he says, his voice quavering as he wipes away his tears, “and now my body is relatively better.” 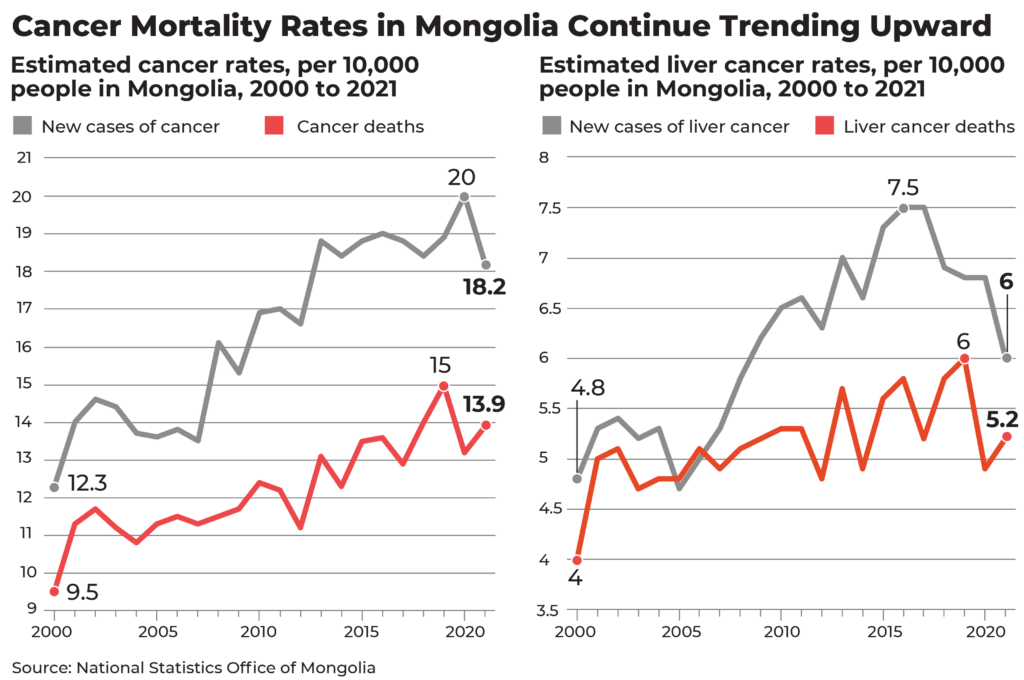 His wife, Ganzorigt Purevkhaich, watches him. “It would have been very difficult if it had been done a month later,” she says. The surgery itself was free under Mongolia’s 2021 health sector reform, but pre- and post-surgery costs were 3 million Mongolian togrog ($958), which the couple replenished with the help of the family. (The average monthly income in Mongolia is about 1.3 million togrogs [$415]according to 2022 data from the National Bureau of Statistics.) Ganzorigt says the costs would have more than doubled if the operation had taken place in Ulaanbaatar.

Mongolians outside the capital travel long distances to the capital with their families, incurring high costs to receive treatment for months, says Tuvshin Bayasgalan, a surgeon at the cancer center. Dalkhsuren’s trip to confirm the diagnosis, for example, cost him 2 million togrog ($638). Those who cannot afford these expenses often resort to traditional remedies that doctors say do not work.

For many years, Tuvshin dreamed of bringing cancer surgery to rural Mongolia. In 2021, when Mongolia changed the structure of its healthcare system, allowing provincial hospitals to choose which treatments to offer based on local needs, he decided to act. Together with Oyunjargal Gungaa, head of Khuvsgul General Hospital, Tuvshin began training local doctors, performing more than 40 surgeries in six months. 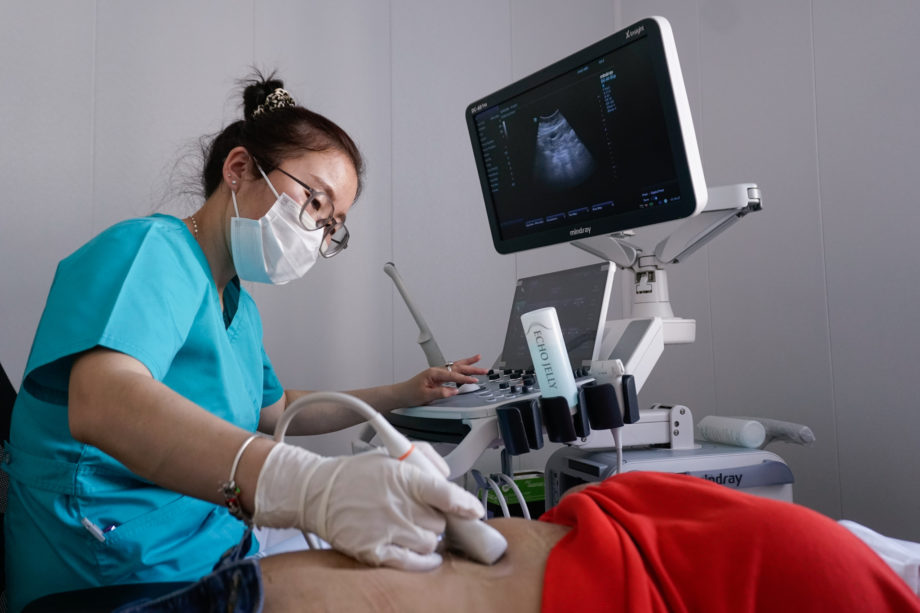 Chantsaldulam Sarankhuu, an oncologist, performs an abdominal ultrasound on a patient at Erdenebulgan soum general hospital in central Arkhangai province.

“The only obstacle to carrying out an operation in rural areas is a staffing problem,” says Tuvshin. As part of his project, two local doctors traveled to South Korea for training, and two experienced oncologists from Ulaanbaatar moved to the province. He lists better pay and access to advanced equipment as possible incentives. The equipment and tools needed for these operations were mainly provided with the help of donors, says Oyunjargal.

Health spending accounted for 3.6% of the 2021 national budget, according to the National Statistics Office. Mongolia’s health ministry, which last May launched a nationwide screening program for early cancer prevention, did not grant an interview for this story, despite multiple requests.

Greater attention to public health would reduce the cancer burden in Mongolia, said Enkhtsetseg Luvsannamsrai, client support manager at the National Cancer Center. “You could say that in our country, patient care and services are well developed, but preventive care and services are almost underdeveloped,” she says. 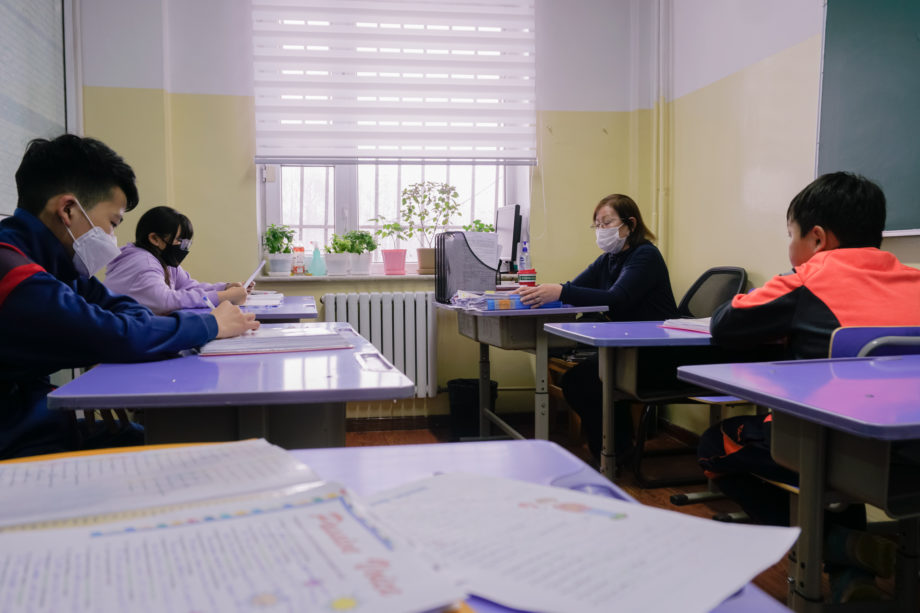 Naranjargal Dashdorj, director of the private foundation Onom, which works to contain viral hepatitis, says it is especially important to closely monitor people with advanced liver disease, such as cirrhosis. Performing six-monthly abdominal ultrasounds on these patients may be more effective than testing healthy people once a year.

But many Mongolians do not even know that they are chronic carriers of hepatitis. Between 2016 and 2018, for example, health authorities in the central province of Arkhangai tested more than 45,000 residents over the age of 15 for hepatitis C – out of a total of 73,686 – and 2,463 people were subsequently received free treatment.

Dorjpalam Lkhamragchaa, 65, was one of them. “I don’t know how long I lived with the virus,” she says. “I thought about getting tested just in case. Maybe I would have faced a serious situation if I hadn’t found out.

Chronic Liver Disease (CLD) Therapeutics Market in Middle East & Turkey is expected to be around US$1,500 Million with a healthy CAGR of 5.8% by 2028