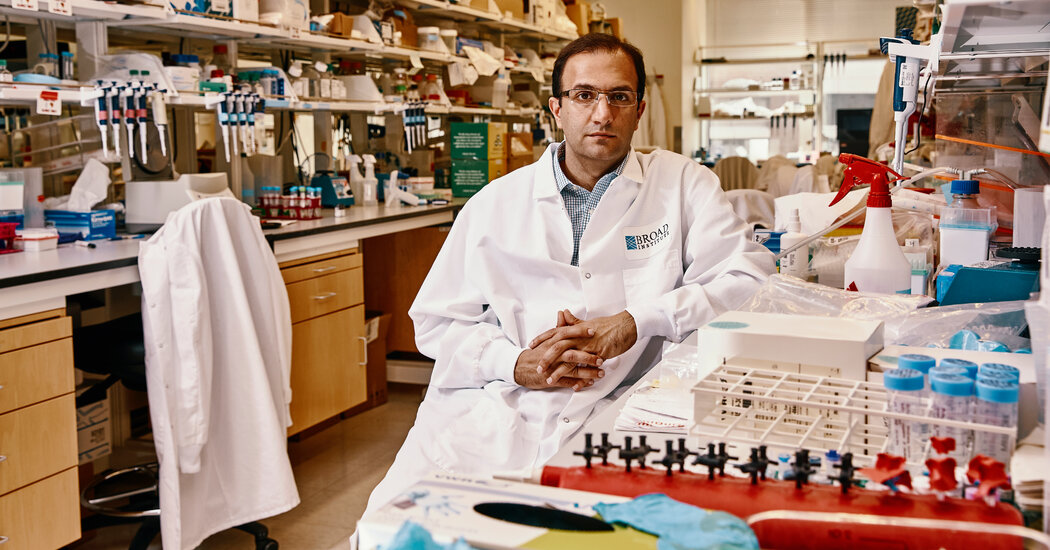 He cannot heal his father. But a scientist’s research can help everyone.

CAMBRIDGE, Massachusetts – When Sharif Tabebordbar was born in 1986, his father, Jafar, was 32 years old and already had symptoms of muscle atrophy. The mysterious illness would come to define Sharif’s life.

Jafar Tabebordbar could walk when he was in his thirties but stumbled and often lost his balance. Then he lost his ability to drive. When he was 50, he could use his hands. Now he has to support one hand with the other.

No one could answer the question plaguing Sharif and his younger brother, Shayan: What was this disease? And would they develop it like their father did?

Growing up and seeing his father gradually decline, Sharif vowed to solve the mystery and find a cure. His quest led him to a PhD in Developmental and Regenerative Biology, the most competitive ranks in academic medical research, and a discovery, published in September in the journal Cell, which could transform gene therapy – a drug that corrects genetic defects – for almost any muscle wasting disease. This includes muscular dystrophies that affect approximately 100,000 people in the United States, according to the Muscular Dystrophy Association.

Scientists often use a deactivated virus called adeno-associated virus, or AAV, to deliver gene therapy to cells. But damaged muscle cells like the ones plaguing Dr Tabebordbar’s father are difficult to treat. Forty percent of the body is made up of muscles. To transmit the virus to these muscle cells, researchers have to administer huge doses of drugs. Most viruses end up in the liver, damaging it and sometimes killing patients. The trials have been halted, the researchers are blocked.

Dr Tabebordbar has successfully developed viruses that go directly to the muscles – very few end up in the liver. Its discovery could allow treatment with a fraction of the dose, and without the crippling side effects.

Dr Jeffrey Chamberlain, who studies therapies for muscle disease at the University of Washington and is not involved in Dr Tabebordbar’s research, said the new method “could be taken to the next level,” adding that the same The method could also allow researchers to precisely target almost all tissues, including brain cells, which are only beginning to be seen as targets for gene therapy.

And Dr Francis Collins, director of the National Institutes of Health, which helped fund the research, said in a blog post that it holds “potential to target other organs”, “thus potentially providing treatment for a wide range of genetic diseases”.

Dr Tabebordbar’s small office at the Broad Institute has a glass door that opens directly onto his bench. It’s not intimate. There are no photos, no books, no papers strewn on the white counter that serves as a desk. Even the whiteboard is clean. There, fueled by caffeine, he typically works 14 hours a day, except on days he plays football with a group at MIT.

â€œIt’s incredibly productive and incredibly efficient,â€ said Amy Wagers, who held a PhD from Dr Tabebordbar. Advisor and is Professor and Co-Chair of the Department of Stem Cells and Regenerative Biology at Harvard. â€œHe works all the time and has this incredible passion and incredible dedication. And it’s contagious. It spreads to everyone around it. That’s a real skill – his ability to take a bigger picture and communicate it. “

Here are some more compelling stories that you can’t help but read until the end.

Dr Tabebordbar and his wife live in Cambridge, Massachusetts. He enjoys cooking Persian dishes and hosts a feast in his tiny apartment every Thanksgiving for a dozen friends. While working on his bench, he listens to Persian music, podcasts or audiobooks. He loves biographies and mentioned a passage he found significant in the autobiography of one of his heroes, England footballer Michael Owen.

Mr Owen writes that when he learned he had been voted European Football Player of the Year in Europe, his reaction was moderate. “All I wanted was to score the next goal, the next hat trick and lift the next trophy,” Owen wrote. “Looking back, I was relentless in this regard and I have no doubt that this mindset was the key to my success.”

“It’s like me,” said Dr Tabebordbar. â€œIt’s amazing that we achieved this goal, but nowâ€ – he snaps his fingers – â€œwe have to get down to business.

Dr Tabebordbar was born in Shiraz, Iran, but moved to Rasht when he was 9 years old.

Based on his score on a national test, he was admitted to a high school that is part of the Iranian National Organization for the Development of Outstanding Talent. There, motivated by his willingness to help his father, he focused on the biological sciences. His mother, Tahereh Fallah, who aspired to be a doctor but was unable to continue her education in Iran, pushed Sharif and his brother to excel and celebrated their successes.

After high school, Sharif was determined to be one of eight to ten students in the country admitted to an accelerated program at the University of Tehran. It leads to a bachelor’s, master’s and doctoral degree in just nine years.

â€œIt was my dream,â€ he said. “I had to study really hard for this exam – English, Arabic, Science.” It paid off – he placed sixth out of 1.3 million.

At the University of Tehran, he majored in biotechnology. After four and a half years, he obtained a master’s degree but started applying for a doctorate. programs at top international universities researching muscular dystrophies, hoping it would lead to a discovery that might help her father. It ended up in Dr. Wagers’ lab at Harvard.

All the while, the question hung over him: what caused his father’s illness?

When his father came to Harvard to attend the 2016 graduation ceremony, Dr Tabebordbar took the opportunity to have Jafar’s genes sequenced and uncovered the mystery. No mutation was found.

“How is it possible?” Dr. Tabebordbar asked.

More detailed and sophisticated testing ultimately revealed the answer: Her father suffers from an extraordinarily rare genetic condition, facioscapulohumeral muscular dystrophy, or FSHD, which affects about four to 10 in 100,000 people. It is not caused by a disease. mutation in a gene. Instead, it’s caused by a mutation in an area between genes, causing a toxic chemical to be excreted that kills muscle cells.

Much to Dr Tabebordbar’s horror, he learned that he had a 50-50 chance of inheriting the mutation from his father. If he had it, he would contract the disease.

He was tested by a friend, who called him with the result.

Dr Tabebordbar had inherited the mutation but, surprisingly, the mutated gene was missing the last piece of toxic DNA, preventing the onset of the disease.

â€œYou are the luckiest of the unlucky guys,â€ he recalls telling his friend.

In Dr Wagers’ lab, Dr Tabebordbar worked on muscular dystrophy using CRISPR, the gene editing technique. He attempted to use AAV to transport CRISPR enzymes to muscle cells where he could correct the mutation. As others have discovered before him, it was not that simple.

In 2014, Dr Chamberlain of the University of Washington reported that AAV could deliver gene therapy to the muscles of mice. But treatment required “astronomical doses” of the disabled virus, Dr Chamberlain recalled.

â€œAt these very high doses, you are on the verge of other problems,â€ Dr. Chamberlain said, and the liver is overwhelmed.

Despite the risk associated with high doses of AAV, gene therapy clinical trials are underway for patients with muscle disease, but only in children. Their smaller bodies can cope with lower doses that contain less virus.

Gene therapy with AAV has been approved for a fatal muscle disease, spinal muscular atrophy.

“It’s a horrible disease,” said Dr. Mark Kay, a gene therapy researcher at Stanford. Even with the child-sized doses, some children died from the medicine meant to save them.

â€œBut if you don’t treat them, they will die of the disease,â€ Dr. Kay said.

Dr. Tabebordbar’s project at Harvard also suffered from high dose issues. Although he was successful in correcting muscular dystrophy in mice – a feat reported at the same time by two other labs – it did not guarantee that gene therapy would work in humans. Different species – even different strains of mice – can have different responses to the same gene therapy. And the AAV doses were dangerously high.

An illness like the one from which Dr Tabebordbar’s father suffers is particularly difficult. The most common muscular dystrophies are caused by a mutation that leaves patients without a particular protein. Gene therapy needs to replenish this protein in some muscle cells, but not all.

The disease afflicting Dr Tabebordbar’s father involves a toxic substance produced by about one percent of muscle cells which then spreads through muscle fibers. To rid the muscles of this toxin, gene therapy must reach every muscle cell.

After graduating from Harvard, Dr Tabebordbar thought he had the opportunity to develop gene therapy for muscular dystrophy at a biotechnology company. But after about a year, the company called everyone into a conference room to tell them that there was going to be a reorganization and that the muscular dystrophy program was abandoned. Dr Tabebordbar knew he had to go elsewhere.

He got a job in Pardis Sabeti’s lab at the Broad Institute and got to work. His plan was to mutate millions of viruses and isolate those that went almost exclusively to muscle.

The result was what he hoped for – viruses that focused on muscles, in mice and also in monkeys, making them much more likely to work in humans.

As scientists know, most experiments fail before anything succeeds and this work has barely begun.

“I will do 100 experiments and 95 will not work,” said Dr Tabebordbar.

But he said it is the personality that is required of a scientist.

â€œThe mindset I have is, ‘this won’t work’. It makes you very patient.

Dr Chamberlain said that with all of the preclinical work being done by Dr Tabebordbar, the new viruses could move into clinical trials soon, within six months to a year.

Now Dr Tabebordbar has taken his next step. His life, apart from his brief stint in biotechnology, was academic, but he decided he wanted to develop drugs. About a year ago, he co-founded a pharmaceutical company, called Kate Therapeutics, which will focus on gene therapy for muscle disease and settle there for the next phase of his career.

He hopes that his work will save others from suffering. However, the fate of his father weighs on him. Jafar Tabebordbar missed the window when it might still be possible to help him.

â€œHe was born too early,â€ said his son.