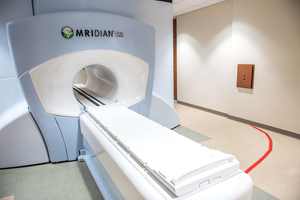 Henry Ford Health is the first in the world to

The MRIdian A3i is the latest enhancement to the MRIdian system from ViewRay, Inc., which was the first commercially available FDA cleared linear accelerator-based MRI-guided radiation therapy system capable of imaging and treating patients simultaneously. In 2017, Henry Ford was the first in the world to treat a patient with the MRI system, and in 2021 he became the first in the United States to have two MRI systems when his second was installed in the new pavilion of the Cancer by Henry Ford in Detroit.

“People around the world come to Henry Ford Health for advanced cancer treatment,” said Parag Parikh, MD, director of MRI-guided radiation therapy and gastrointestinal radiation therapy at Henry Ford Health Cancer. “MRIdian’s accuracy and speed have made accelerated treatments possible not only for prostate, breast and lung cancer, but also for traditionally difficult areas such as the liver, pancreas, oligometastatic diseases and reirradiation. , with many of these treatments ending in one to two weeks.”

This new technology allows for improved tracking of the radiation beam and delivers radiation therapy only when the tumor is in the treatment field. This protects healthy tissue from radiation by automatically shutting off the beam when a single target exceeds clinician-set limits. New MRIdian A3i features allow Henry Ford clinicians to simultaneously collaborate and connect remotely during patient treatment to expedite treatment for the patient. MRIdian A3i also extends existing real-time tissue tracking and automated beam synchronization capabilities to include multiplanar tracking and synchronization in up to three planes. Henry Ford plans to pioneer brain treatment with MRIdian A3i using the new brain treatment package including the dedicated brain coil and the integrated immobilization system.

“Henry Ford Health is a leader in the field of MR-guided radiation therapy, not only for its early clinics, but also for its leadership in training and innovative research,” said Scott Drake, President and CEO of the management of ViewRay. “As the first center to treat patients with MRIdian A3i, Henry Ford Health continues to take MRI-guided radiation therapy to the next level. We look forward to Henry Ford’s continued leadership and expanding the use of the MRIdian A3i to treat the brain.

Henry Ford’s MRIdian systems represent two of 50 MRIdian systems worldwide. The systems are used to treat a wide variety of solid tumors and are the subject of many ongoing research efforts. MRIdian has been the subject of hundreds of peer-reviewed publications, scientific meeting abstracts and presentations.

Henry Ford Health Cancer is one of Michigan’s largest cancer programs, providing care at five hospitals, 11 ambulatory care facilities and hundreds of doctor’s offices lined up in southeast and south central Michigan. Michigan. Henry Ford’s oncology experts communicate seamlessly across the organization’s multiple cancer treatment sites, providing patients with access to the most advanced treatment options and expertise, close to home. The treatment of the most complex or rarest cancers and Henry Ford’s extensive cancer research program are anchored at its Detroit site.

Serving communities in Michigan and beyond, Henry Ford Health is committed to partnering with patients and members throughout their health journey. Henry Ford Health provides a full continuum of services – from primary and preventative care, to complex and specialty care, to health insurance, a full range of home care offerings, virtual care, pharmacy, eye care and other retail healthcare.

It is one of the nation’s leading academic medical centers, recognized for its clinical excellence in cancer care, cardiology and cardiovascular surgery, neurology and neurosurgery, orthopedics and sports medicine, and heart transplants. multiple organs. Consistently ranked among the top five NIH-funded institutions in Michigan, Henry Ford Health engages in more than 2,000 research projects annually. Equally committed to training the next generation of healthcare professionals, Henry Ford Health trains more than 4,000 medical students, residents and fellows each year in more than 50 accredited programs.

With more than 33,000 valued team members, Henry Ford Health is also among Michigan’s largest and most diverse employers, including nearly 6,000 physicians and researchers from the Henry Ford Medical Group, the Henry Ford Physician Network, and the Jackson Health Network.

ViewRay, Inc. (Nasdaq: VRAY) designs, manufactures and markets the MRIdian® MRI-guided radiation therapy system. MRIdian is built on a proprietary high-definition MR imaging system designed from the ground up to meet the unique challenges and clinical workflow of advanced radiation oncology. Unlike MRI systems used in diagnostic radiology, MRIdian’s high-definition MRI has been specifically designed to address specific challenges including beam distortion, skin toxicity, and other issues that can arise when high magnetic fields interact with beams of radiation. ViewRay and MRIdian are registered trademarks of ViewRay, Inc.

Disclaimer: AAAS and EurekAlert! are not responsible for the accuracy of press releases posted on EurekAlert! by contributing institutions or for the use of any information through the EurekAlert system.

WHO: 650 unusual cases of hepatitis in children; Liver cancer and AAD; Risk of shingles in UC