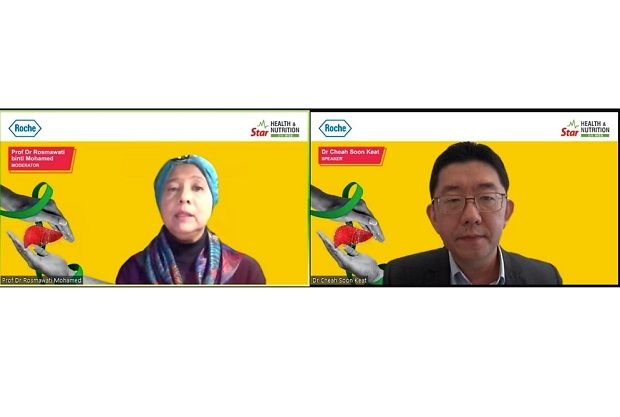 PETALING JAYA: Fatty liver disease is fast becoming one of the leading causes of liver cancer in Malaysia, which is the sixth most common cancer in the country, experts say.

According to a study on liver cancer published by UMMC this year, the leading cause of cancer was hepatitis B at 44%, followed by fatty liver at 42%, hepatitis C at 8% and alcohol. at 6%.

“These are the signs of modern times, with an increasing number of individuals – adults and children alike – having expanding waistlines. Fatty liver disease is now a major health problem and has become the most common liver disease in Malaysia.

“Fatty liver disease is fast becoming the leading cause of liver cancer, almost equal to hepatitis B based on the current study,” she said in the “A Red Alert When You Turn Yellow” webinar. October 9th hosted by Star Media Group and supported by Roche yesterday.

More often diagnosed in men than women and generally in people over the age of 50, liver cancer is the sixth most common cancer in Malaysia.

Prof Rosmawati said that for the majority of people with underlying liver disease such as hepatitis B or hepatitis C, treatment could reduce their risk of developing liver cancer.

However, the majority of people with liver disease, she said, had no symptoms, adding that major signs such as jaundice, fatigue or ascites occurred when the disease was already advanced. or when developing liver failure, advanced cirrhosis or liver cancer.

â€œThat’s why we say there is a red alert when you turn yellow.

â€œPatients at high risk of developing liver cancer should be included in monitoring programs, which means screening every six months,â€ she said.

Professor Rosmawati said that to reduce the risk of developing liver cancer, people should control their diabetes if they have diabetes and lose weight if they are overweight.

â€œStudies have also shown that losing between 7% and 10% of weight can completely reverse inflammation in your liver and stop the progression of cancer.

â€œExercising 150 minutes a week and eating a healthy diet helps.

â€œAvoid unsafe injecting practices and sharing needles, and lastly, avoid alcohol, as it can cause liver disease which can progress to liver cancer,â€ Prof Rosmawati said.

Clinical oncologist Dr Cheah Soon Keat said based on his experience, patients can sometimes appear asymptomatic, adding that even those with a fit lifestyle could still develop liver cancer due to other causes.

â€œIn my practice, especially when I started working for the Ministry of Health, the majority of patients have symptoms such as bloating and weight loss.

“But other symptoms such as fatigue, jaundice, swelling of the abdomen or legs, easy bruising or pain are typical but also nonspecific signs,” he said.

At the same time, he said some patients may have bone or back pain for a few months before going to the doctor.

â€œThe doctor should be vigilant knowing that these may be symptoms of an underlying malignancy,â€ said Dr. Cheah.

This was the case with Lim Jit Sai, a liver cancer patient, who explained how he was diagnosed in 2017 after undergoing an ultrasound for persistent back pain from a kidney stone.

Lim said the ultrasound did not detect any kidney stones, but instead showed growth in the liver, which was confirmed by a subsequent CT scan.

“I have no family history of liver cancer and I don’t smoke or drink and I was careful about my diet so I didn’t think at the time that I was at risk for liver cancer. .

â€œI have not had any alarming symptoms that would warrant medical attention. It was only because of this kidney stone pain in my back that brought me to the hospital emergency department.

â€œI had no other symptoms that interfered with my daily activities, nothing noticeable, no loss of appetite, and nothing that would indicate anything unusual,â€ Lim said.

The only thing he noticed was gradual weight loss, but a liver function test he performed didn’t sound any alarm bells and he attributed the weight loss to his active lifestyle. .

Prof Rosmawati said Lim was one of the rare cases of a patient without underlying liver cirrhosis but ended up with liver cancer anyway.

Lim, who underwent surgery in February 2018 to remove part of her cancer-stricken liver, had regular check-ups and managed to recover another small growth in July 2019, which was also treated.

Another scan this year showed yet another small growth, which was also treated.

Dr Cheah said it shows the importance of routine checkups as cancer can come back after remission, adding that it will allow doctors to detect if something is wrong with the patient.

“As for individuals without any other risk factor for liver cancer, I would say that having an annual screening is sufficient,” he added.

We need you in the fight against liver cancer, join # OctoberIs4Livers 2021