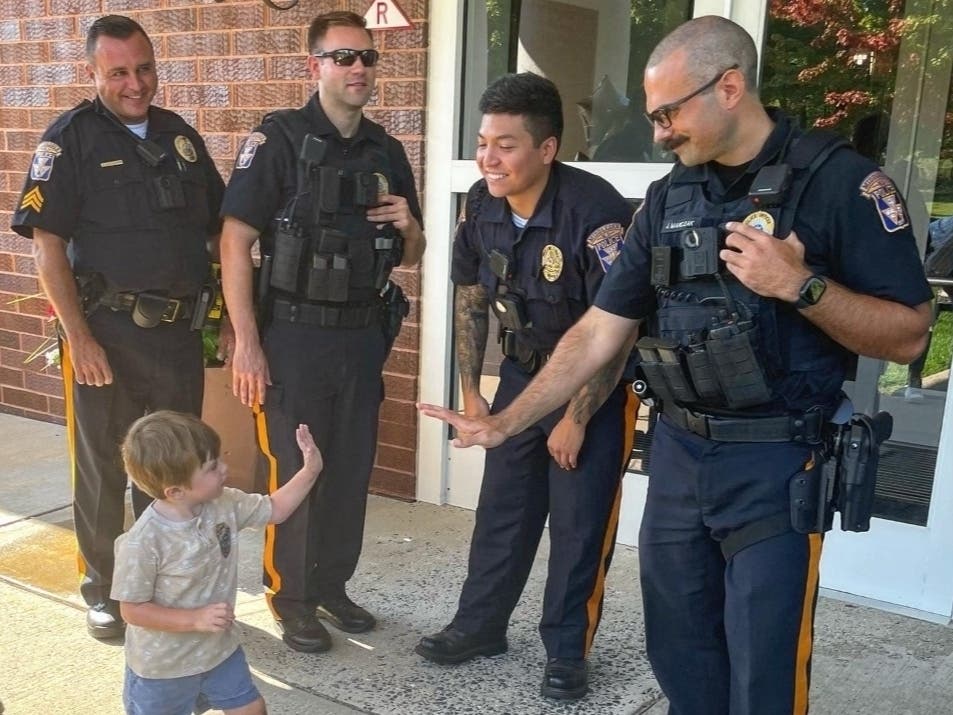 MIDDLESEX BORO, NJ – A Middlesex boro police officer saved his nephew’s life by donating 25% of his liver to the two-year-old, who suffered from liver failure.

Jamie Marczak, 32, played down the personal risk to himself and the seriousness of his nephew’s condition. But the boy’s mother, Melissa DeMatteo, 34, of Lawrenceville, disagreed.

“My brother absolutely risked his own life to do this. And Lucas was about to die. After the surgery,” DeMatteo said. “The surgeon told us Lucas only had about a week left if he didn’t get a new liver.”

When Lucas was a newborn, doctors realized that the bile ducts in his liver had not finished developing. At just a few weeks old, he started getting jaundice and started losing weight. As a child, he underwent his first liver bypass surgery. But surgeons warned his mother and father that Lucas would likely need more serious surgery as he got older.

Then, at the age of 2, Lucas’ condition worsened considerably. His liver basically stopped working. The family saw him become jaundiced again and develop almost constant diarrhea and vomiting.

“He was very sick for a long time,” DeMatteo said. “He was really yellow and his belly was protruding. He was throwing up 10 to 15 times a day. He couldn’t really keep food down.”

The DeMatteo family was told that the only thing that could save Lucas’ life was if someone close to him donated part of his liver.

“We met 10 people: I wasn’t fit, my husband wasn’t fit. Everyone got rejected for one reason or another,” DeMatteo said. “Or, we would find a matched donor, but Penn Medicine would run tests and let us know at the last minute that it wouldn’t work. It was excruciating.”

And then there was Marczak.

“It came to me,” he said. “It made me so sad every time I saw my nephew. He couldn’t keep food down. Kids his age are supposed to have tons of energy and always run around. He just lay there. I would do anything that I could to help my sister.”

Marczak said he was nervous before the surgery, a six-hour procedure performed in December 2021 at Penn Medicine in Philadelphia.

Recovery hasn’t been easy for either Lucas or his uncle.

“I was in a lot of pain and very tired,” Marczak said. “It was really bad for probably two months. But now the fatigue is gone and I’m back to work.”

For Marczak, the doctors told him that it would take about four months for his liver to regenerate and function healthily again. As for Lucas, doctors hoped his body would adapt and accept his uncle’s donated liver as its own. But organ donations, especially liver donations, come with very high levels of risk and complications, compounded by the age of the recipient.

Lucas developed post-liver transplant disease, which is basically a type of cancer, and he received chemotherapy, his mother explained. He developed leaks from the surgery and needed stents; he developed multiple infections and had to be put on a ventilator. He also developed COVID while in pediatric intensive care.

“We had to wait over a year for the tour, so he could feel better,” Marczak said. “But he’s a different person now. He can ride a bike, he runs everywhere. He has so much energy now. And he’s completely changed, all because of the surgery.”

Marczak said he wanted to tell his story in the media to show people what is possible.

“You can save the life of a family member or a friend,” he said. “If you’re ever asked to do something like this for a loved one, you should do it, especially if you’re young and healthy.”

DeMatteo that in times of extreme struggle, family has always been there.

“These last three years have been really tough. I can say 100% that for my husband and I, our family on both sides is the only reason we survived,” DeMatteo said.