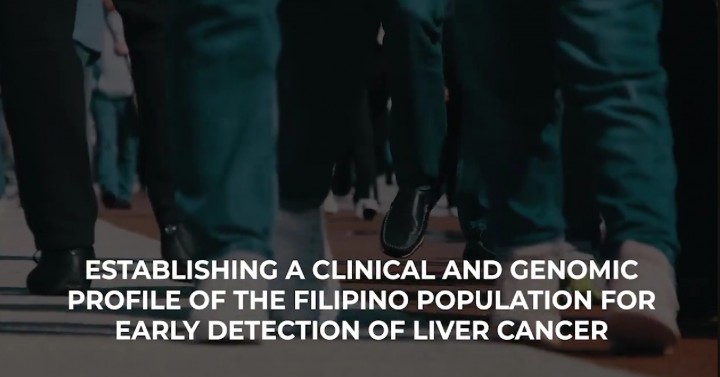 MANILA — Recruitment of 800 patients for a study on the early detection of liver cancer in Filipinos with chronic hepatitis B is nearing completion, Science Department Secretary Fortunato de la Peña announced Friday.

In a taped report that aired in the afternoon, he said researchers are establishing a clinical and genomic profile of the Filipino population for the early detection of liver cancer.

This study from the University of the Philippines Manila (UPM) aims to develop an artificial intelligence (AI)-based detection system for the early diagnosis of liver cancer in Filipinos with chronic hepatitis B.

“Recognizing that cancer remains a national health priority in the Philippines with significant implications worldwide and that cancer is the third leading cause of morbidity and mortality in the country, DOST, through the Philippine Council for Health Research and Development (PCHRD) continuously invests in cancer research,” said De la Peña, adding that PCHRD supports the study.

Recruitment of study participants was made possible with the help of partner hospitals across the country. Whole-genome genotyping of patient samples will begin at the Philippine Genome Center, while phenotypic evaluation, such as biomarker assays and ultrasound imaging, is ongoing, according to De la Peña.

The DOST chief said an effective and comprehensive way to study liver cancer is through a multi-omics approach, which he says is also a reliable tool for diagnosing a patient’s prognosis.

“Multi-omics approaches are novel frameworks that integrate multiple omics datasets generated from the same patients to better understand the molecular and clinical characteristics of cancers, which could lead to the discovery of clinically relevant biomarkers that can be used for diagnosis. Early prediction of this could also determine the possible course of the disease or serve as new targets for therapies,” he said.

De la Peña pointed out that since this cancer is related to the hepatitis B virus, a primary prevention option is vaccination. “However, this does not apply to patients who already have the disease. Then it is important to do secondary prevention or screening that can detect different stages of cancer, from where appropriate medical intervention can be provided,” said he noted.

The Philippines is not yet fully equipped with evidence to integrate liver cancer screening into the healthcare system, he added.

“With this study, a clinically useful scoring system for the diagnosis of liver cancer can be produced, which will be used by clinicians. They will benefit from a reliable scoring system that will allow them to decide how often tests diagnostic tests should be performed, maximizing the use of limited patient funds while maintaining good clinical practice,” said De la Peña.

DOST sees that generation omics data among Filipinos will stimulate medical research for a more complete understanding of the nature and mechanism of liver cancer. (NAP)